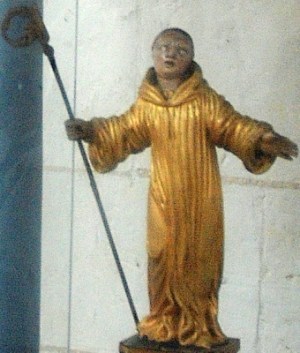 APRIL 26 is the traditional memorial of ST. RICHARIUS (+c. 643). Richarius, or Riquier, was born near the coast of the English Channel, near Amiens, France, around the year 560. This was the time of the Merovingian Kingdom, before Charlemagne. Most of the Franks were pagan, as was Richarius. His parents did not leave him property and he spent his youth in farm labor, practicing moral virtue.

At one point, Richarius came across a band of locals who were torturing two men. Richarius was able to rescue the two, Cadoc and Frishor, before the group killed them, blaming the two for the crop failure that year. The young farmer welcomed god in these strangers and hosted and cared for them for some time. The men were Welsh or Irish priests passing through the countryside and were more than happy to discuss Christianity with this young man. They taught him the maxims of perfect virtue and the presence of the Lord. By this, Richarius learned to fast on bread and water.

After this, Richarius moved to England to study, preach and cure. He would ride from place to place on a donkey, reading his psalter as they went along. Eventually, he was ordained and he returned to his homeland. His ability to preach with his heart aflame with love brought many of the pagan Franks to know of God and convert.

In 638, Richarius founded a small monastery at Centula, near his home. King Dagobert I, king of the Franks, visited the monastery. Richarius offered the king advice in a frank, clear way, with no indication of fear or flattery. Dagobert was so impressed with the advice that he became a benefactor of the monastery. He was copied by others and soon Richarius had sufficient money to do as he saw fit, help the lepers, feed the poor and pay ransom to release prisoners held by England.

Five years after founding Centula, Richarius chose to retire into the woods. He left most of his disciples and developed a shelter in the forest of Crecy, 15 miles from Centula. It was named it Forest-Mortier. The tired priest lived with Sigobart, his disciple, as a hermit, in perpetual contemplation and prayer. On April 26, 643/5, he bid Sigobart good-bye and died. He was buried in a coffin made of an oak tree trunk and moved back to Centula

Charlemagne, 150 years later, thought so highly of this priest that he had a golden shrine made for the relics.

What was the advice given to King Dagobert? “He who has to obey will only have to render account to God of himself, but he who commands will also have to answer for all his subjects.”