Who is there that does not enjoy a few days out in the country during summer time? To see the fields ready for harvest, to see the trees laden with fruit so that the branches must be propped up to keep them from breaking down with the weight of the fruit they hold. Pleasing though this sight may be, it all is the result of hard work. In spring the farmer must be out in the fields plowing, cultivating and sowing. The fruit trees must be trimmed and sprayed. Had the farmer been careless and idle, the fertile fields would be desolate wastes; the fruit trees now laden with fruit would be bare. The farmer, then, cannot expect a plentiful harvest unless he works faithfully in the spring.

In a similar way, our life is divided into seasons. Youth is the springtime of life. Unless you are busy now, your summer of ripe manhood and your winter of old age will be dismal failures. A few years hence you will be young men. It will not, however, do to be men in looks only, and mere children in actions. To be nothing but an overgrown baby is nothing to be proud of. The fact is, we have such over-grown babies. Some boys grow to young manhood without developing their character. As none of you want to be overgrown babies, you will have to develop your character.

Conferences For Boys
At the present time, your minds and hearts are soft and pliable, but you will be fashioned after the mold you will select. You will become fixed and set in your ways for better or worse. It is useless to try and give the cement block another shape or size. It will be equally useless to try to give your heart and mind a different cast after you are once set in your ways. From this, then, you will see how important it is that our hearts and minds are given a proper training. If a serious fault is committed in that regard all the efforts in the world may not suffice to remedy it.

This suitable training of mind and heart we call developing, or building up the character. We speak of good and bad characters in as much as this training was either good or bad. We may speak of a person as being a grand or lovely character because his goodness of heart and mind outweighs everything else. Of others we may speak as being bad or dangerous characters because they are always inclined to do wrong. The thief, the drunkard, the liar, the backbiter, or the unchaste person, such people are called bad or dangerous characters, and with very  good reason.

Developing character, to a great extent, may be likened to the work of the architect. He first sees the building in his mind. Then, after he has fully thought out the plans, he brings them to paper.  The masons receive their plans and specifications and are told how the various stones or bricks must be placed. The mason may not realize the greatness of the work. It is not necessary. All he has to do is to make his work agree with the plans before him. The beauty of the building will then take care of itself. All he must do is to put up the bare walls; others will finish the work.

In forming your character, another has made the plans long before you ever thought of character. The plans for your character were drawn up by none other than almighty God Himself. He gave them to a helper to have your character built up for you. The Catholic Church is this helper and she does this work of building up your character by her teaching, by her parish school, her societies, and, last but not least, by the aid of your parents. You yourself are the workman. As the bricklayer may not realize the magnitude of the work as he lays stone upon stone, so neither may you realize the loftiness of the character you are building up by following the plans of God. Your early instructions at home, your training in school, your instructions prior to your first Holy Communion, they are as so many stones and bricks. With them you have laid the foundation of a living temple of the Most High. And now that the foundation has been laid, you must not think of stopping.  As members of the Church, you continue this building up of your character. The conferences, the rules of the Church, daily prayer, the frequent reception of the Sacraments are as many more building stones. If you place all these stones as they should be placed according to the plans of our heavenly Father, you may be sure you are building for yourself a fine character; a character pleasing to God, to His holy angels and the saints.

Here again, you find an explanation of the purpose of the Church. Its aim is not to get a nickel or a dime out of your spending money, but to help you systematically to build up your character. Boys that do not belong to the Church miss more benefits for their later years of life than they may realize at the present time. And, what is more, the loss is lasting. The future will never return to you your youth.

We need never think of building up a good character according to the plans of God if we permit such pet sins to grow stronger. Before you are aware of it, your youthful hearts and minds will be set in their ways and then it will be too late to mend. The warfare you must wage against evil inclinations is different from any other. When two nations are at war they will stop fighting after they have had enough of it. Peace is declared and they enter upon agreements as though there had never been the least difference between them. If we could but say the same of our warfare against our evil inclinations! If we could only say: “Now this must stop. You have been beaten fairly and honestly so often that to fight longer would be useless.” Alas, we can never say this. This battle will only end with our last breath. No victory of arms is so crushing as to force this enemy to surrender. We may gain a glorious victory and the very next moment be attacked again. We may gain a thousand victories, but lose the last battle and we are lost forever. For that very reason our dear Savior said repeatedly, “Watch and pray.” 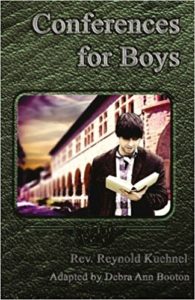 Therefore, to hope to crush our inclination to evil with one mighty blow would, indeed, be foolish. It can never be done. To build up our character systematically, we must aim the strongest blows at our pet sin. That means strengthening our weak point. Frequent Confession will show you your pet sin without much effort. And this pet vice must be stopped by all means, if you wish to be victorious at the end. With the grace of God we can overcome evil inclinations. Without Christ we can do nothing; with Him, everything.

Sad though the aspect of a predominant sin may be, there is the consolation that we have also an inclination for some certain virtue. Our heavenly Father has so shaped our disposition that some certain virtue will appeal more to us, and seem easier to practice, than another virtue. Your training and environment have much to do with this. This idea we see brought out in the lives of the saints. The saints, it is true, practiced all virtues, still they made one particular virtue their specialty, and practiced that in a higher and more heroic manner than other virtues. Where St. Francis excelled in humility, St. Elizabeth of Hungary excelled in patience. St. Francis of Sales excelled in meekness of heart, St. Aloysius excelled in purity, St. Wenzeslaus excelled in zeal for holy faith. And, so, we might go through the entire list of saints and find each one of them excelling in some certain virtue, as star differs from star in brilliancy.

We, too, have the germ of some certain virtue that should be a part of us. Some certain virtue will appeal strongly to us; we will prefer it to others. That is exactly the very virtue we should try to cultivate. One boy, for instance, is very charitable, always willing to help, even though it may inconvenience him. Another boy is particularly modest and abhors the least improper word. Another is inclined towards prayer. Another is zealous for the glory of God and the salvation of souls by bringing back to the true fold boys that had gone beyond the influence of even the pastor. Another boy is very zealous for the holy faith, defending it fearlessly where others are afraid of saying a word. Whatever the virtue may be to which you feel yourself drawn, practice it faithfully. The other virtues will follow in due time.

Our character would, furthermore, be developed only insufficiently if we tried merely to avoid evil. As we are unable to overcome evil with one blow so neither will we be able to practice all the virtues at once. To develop the good disposition we have, we must practice the virtue to which we are most drawn. Having mastered the first virtue, the one we admire most, we begin practicing other virtues till in the fullness of God’s own time, we have finished  the building up  of our character  and receive a crown in exchange for it.

Character is to disposition what vocation is to work. In each, we should endeavor to draw out and develop the best that is in us. In choosing our vocation we try to use our talents and gifts according to the holy will of God. In developing character, we try with His grace to overcome evil impulses and practice the opposite virtues, so that we may at all times think and speak and act in a way pleasing to God.

A Catholic Mother Speaks To Her Children

It is because our vanity is easily wounded by observations made about our behavior. It is because we do not like to have certain truths told to us. It is especially because a child cannot bear to be found fault with by another child.