A Catholic Mother
Speaks To Her
Children

Do not, then, reproach your little friends. Do so only at such a time, and as often as would be really useful.

A Catholic Mother Speaks To Her Children

Those among you, my children, who are the oldest of their family, have duties to perform towards their younger brothers and sisters. The first of these duties is to set a good example. 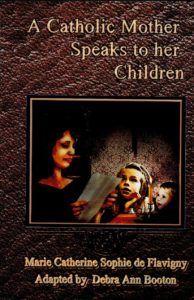 All children, and particularly the younger ones, imitate most easily whatever is done before them. And as they do not have the discernment to distinguish good from evil, it is very important never to do anything wrong in front of them, for fear that, in imitating you, they will contract bad habits, which at a later period of time might become real defects. You owe this good example not only to very little children, but also to those who are nearer to you in age, to your companions, to your friends. No doubt, they are not obliged to imitate the faults they see you commit, and their duty, like yours is to take example of what is good. But the child who is often lacking in courage to perform a duty, particularly when it depends on the sacrifice of what is agreeable, is still more easily drawn to bad example, and the wrong done by others seems to serve as an excuse for his own faults. What is the result of this, my friends? Those that have given this bad example have been doubly guilty, first of all, guilty on their own account, for evil is forbidden, but guilty also for having taught others to commit evil.

There is one thing children give much more easily than good example, and that is advice. The child who has the most faults speaks often very highly of the qualities he does not have, and whenever an opportunity comes, he knows how to reproach his brother with a fault he himself commits every day. Are there not many things to say to this little giver of advice? First of all, since you know so perfectly what is wrong, are you not all the more inexcusable if you do not behave better? And, then, should you not correct yourself before wishing to correct others? In a word, is not an example more efficacious than advice? Do you want to know the reason for this, my children? It is because our vanity is easily wounded by observations made about our behavior. It is because we do not like to have certain truths told to us. It is especially because a child cannot bear to be found fault with by another child. It would, in truth, be much better to benefit by good advice, without minding from where it came. But are children always wise. You, in particular, you who find fault with others, are you wiser than they are?

Do not, then, reproach your little friends. Do so only at such a time, and as often as would be really useful. Try, rather, to give them good examples, which, without paining them, may induce them to do better.

And, in order to be sure, my dear children, of never giving your brothers any but good examples to follow, begin by following yourselves the virtuous examples you have under your eyes. Imitate those examples that are given to you by your parents and by the good and well-behaved children with whom you are acquainted. Remember, too, the affecting and beautiful models offered in Holy Scripture, the piety of Abel, the love and kindness Joseph showed his brothers, the filial tenderness of Tobias, the submission of Isaac and Samuel, and above all, the divine childhood of Jesus Christ.

To be nothing but an overgrown baby is nothing to be proud of. The fact is, we have such over-grown babies. Some boys grow to young manhood without developing their character. As none of you want to be overgrown babies, you will have to develop your character.