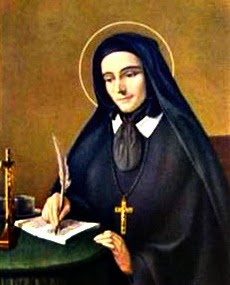 DECEMBER 15 is the traditional memorial of ST. MARY di ROSA (+1855).
Born Paola di Rosa in Brescia, Italy in 1813, this saint was born into a well-to-do family. She was educated in a convent until the age of 17 when her mother died. Leaving her formal education behind her, she went home to run her father’s household and manage one of his mills..Then she began caring for the needs of the girls who worked in the mill. She involved herself in the church’s activities, began a boarding house for the girls and then began, with her brother, a school for the deaf.
In 1836, a cholera epidemic enabled Paola to learn nursing and she continued after the epidemic, helping the elderly.By 1839, Paola had several women who had joined her in her work and they started the Handmaids of Charity, working to alleviate the problems of others. Paola took the name Maria Crocifissa as her new name, in honor of the Crucifix and Jesus’ suffering.
In 1848, revolution was all over Europe. Austria invaded Italy. Sr. Maria stood up to those soldiers with a crucifix and two candles. They did not touch her hospital.
The secret to this small woman’s successes seems to be her willingness to get up before dawn and be with Christ for two hours alone every day, followed by Mass. Her trust in Him and her happiness in helping others made her life the rare charm on earth.
“I can’t go to bed with a quiet conscience if during the day, I’ve missed any chance, however slight, of preventing wrong-doing or of helping to bring about some good.”
St. Mary di Rosa