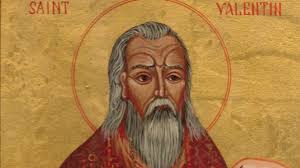 How Valentine came to be associated with lovers and romance is a story of itself: According to some historians, it began with new rules from the emperor, Claudius II. It became illegal for young people to marry.The society was very permissive and living together openly or, even polygamy, was considered acceptable. The reasoning behind the rule was that most young men were not coming into the military voluntarily. It may have been the fact that there were many unpopular wars going on.  If they were married, the emperor reasoned, they might worry about the wives and families that they left behind and what would happen to them if the soldiers died. Thus, if they could not marry, the soldiers would be braver. Well, that was the theory.

Valentine was a priest in Rome at that time. He was teaching a Christian concept of life. Living in sin was not acceptable to the Faith. And many of the young people were drawn to the Faith. He would secretly marry the young couples. However, this was considered an act against the empire, because then the young men could not go into the military. He was eventually caught and accused of keeping men from doing their military duty. He was imprisoned and tortured.

There are some legends about his time in prison. In one, he spoke to a judge named Asterius about the faith. Asterius had a blind daughter. He challenged valentine to cure his daughter’s blindness and then he might believe. Valentine did indeed pray over the child and she was cured. Whether Asterius became a Christian is assumed. Around 269, Valentine was sentenced to a three part execution: beating, stoning and, finally, decapitation. Before the day set upon for his death, he wrote a letter to Asterius’ daughter, Julia, and signed it “from your Valentine”. Probably not completely true, but a good story, non the less.

Valentine was buried in the catacombs of St. Hippolytus. In later years, his body was exhumed and relics sent to many churches through out Europe, including Rome and Dublin, where, to this day, pilgrims go to view these items..

St. Valentine is the patron of love, engaged couples, happy marriages, epilepsy, bee keepers, travelers and those suffering from the plague. Saint valentine, pray for us!

“Now assuredly it is just to preach against those who destroy the one power, which is the most sacred teaching of the Church of God.”
St. Dionysius, 260