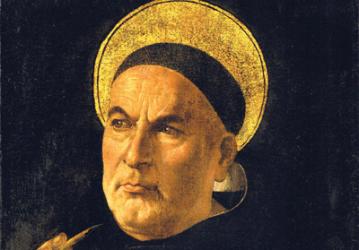 MARCH 7 is the traditional feast day of ST. THOMAS AQUINAS (+1274), this being the anniversary of his death. However, in 1969, it was decided that since the date usually fell in Lent, they would change his feast day to January 28. However, we will discuss him today.

Thomas  was born of a moderately well to do family whose parents were Landulf d’Aquino and his wife, Theodora. Landulf’s brother, Sinibald, was the abbot of the Benedictine monastery at Monte Cassino. According to tradition, the younger son of a southern Italian noble family would dedicate himself to the clergy while the older brothers would join the military.   To ready him for his career, the parents sent Thomas to a school attached to the monastery.where he excelled in his studies. By the time he was fourteen, the Emperor Ferdinand had established a school in Naples where Thomas went next. Here he learned about Aristotle and Greek philosophy. At that time, the intellectually-inclined Dominicans were just being established and he met men who influenced his thinking. At the age of 19, Thomas went through a ceremony to become a novice of the order.

His mother, Theodora, was not pleased with his independent action. The Dominicans realized this and decided to get him to Paris. However, the family had horsemen who overcame the little troupe walking to Rome and kidnapped Thomas. He was brought back to the family castle at Roccasecca where he was kept locked for over a year. During that time, he was allowed books and visits from his sisters. So, he taught them philosophy and reason. After a while they chose to take their brother’s side in the dispute. Eventually, Theodora realized she could not contain her son forever, so she allowed him to “escape” at night to save the family name.

He joined his fellow Dominicans and made his way to Paris where he studied, becoming a disciple of Albertus Magnus, a great Dominican professor, even following him to the University of Cologne, where he became an apprentice professor. There he wrote several commentaries on Old Testament books. In 1252, Thomas returned to Paris to work on his Master’s degree. In addition to all his writings required for his degree, he worked as an apprentice professor teaching the Bible and writing his work “On Essence and Being” as well as a detailed commentary on Peter Lombard’s Sentences.

In 1256, he was appointed regent master at the university and wrote numerous works which would form the basis of thought for his Summa. In 1259, he left the university to give other Dominicans a chance to get similar training. He moved to Naples where he became  the general preacher of the province, formally in 1260. Within a year he was moved to Orvieto to become the conventual lector. While there, he completed his Summa Contra Gentiles and several other written works. And when the pope asked him to write music and liturgical works for a feast day, he did that, too.

When Pope jClement IV was elected, Thomas was called to become the papal theologian. At the same time he was named lector for new friars at the school at Santa Sabina. He wrote his Summa Theologica for this population of students.

In 1268, Thomas was called back to Paris to do three more years of professorship. It was much more difficult for him this time. The Franciscans were not pleased with his referenced to the Greeks and continually disputed with him. After three long years, Thomas left Paris to open schools where ever he please.

Within a little over a year, on December 6, 1273, Thomas was seen to meditate and levitate. He was never the same after that. He could not or would nto write any longer and he would not explain himself, not even write that this ever occurred. However, the pope asked him to come to preach at the Council of Lyons in the spring of 1274. An accident, causing some brain damage, occurred on the way. Although he seemed to rally, he died in a Cistercian abbey while delivering a talk on the Song of Songs, March 7, 1274.

Saint Thomas, patron of theologians, we pray for more vocations!

“I am receiving thee, Prince of my soul’s redemption: all my studies, my vigils and my labours have been for love of thee.”
St. Thomas