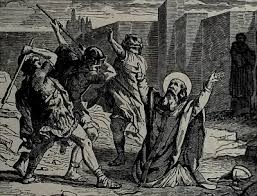 FEBRUARY 21 is the traditional memorial day of ST. SEVERIAN, BISHOP OF SCYTHOPOLIS (+453)

St. Severian, was the bishop of a town in Galilee, now an area by the Palestinean-Israeli border. During his episcopate, the Monophysite heresy was rampant.. the heresy, established by Eutychius, insisted that Christ did not have the two natures of God and man. Dioceses in the Middle East were split, some having two opposing bishops who would deny Communion to the opposition.

Severian was one of the bishops who went to the Fourth Ecumenical Council of Chalcedon in 450. The council agreed that the correct teaching of the Church was that Christ was true God and true man. Once the ruling came down, a monophysite monk, named Theodosius, managed to get Juvenal, bishop of Jerusalem, deposed and personally took over the episcopate. After taking over, Theodosius got a band of soldiers together. They went on a violent rampage, killing many. Even Emperor Marcian claimed that Jerusalem’s streets were filled with blood. After this, the soldiers began to go through the countryside wreaking havoc, killing the orthodox believers.

Our saint was willing to stand up for his beliefs, defending his diocese. The soldiers eventually reached him, taking him and his assistants out of town and killing them.

St. Severian, pray for us.

“The holy synod decided that no one is allowed to declare or at any rate to compose or devise a faith other than that defined by the holy fathers who with the Holy Spirit came together at Nicea…”
Council of Ephesus, 431