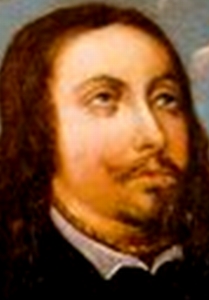 DECEMBER 1 is the traditional memorial of St. RALPH SHERWIN (+1581).
Our saint of today was born in Rodsley, Derbyshire, England on October 25, 1550. A gifted young man, after finishing at Eton, he was given a fellowship to Exeter College, Oxford. Some say that his uncle, the vicar of Ingatestone, Essex, influenced the granting of the fellowship. He graduated with high honors, earning a Master of Arts degree in July, 1574, having excelled in the classics.

At this time, under Elizabeth I, Catholicism was essentially illegal. No one publically claimed to be Catholic, nor were there seminaries or active churches. Ralph kept his head down, so to speak, until he graduated. He then moved to Douai, France, on the Belgian border, to attend the English College, a seminary for Englishmen. Being ordained in 1577, he left for Rome to stay at the English College there.

In April, 1580, Fr. Sherwin and thirteen others were sent on a mission to their homeland. They traveled northward, stopping to visit St Charles Borromeo and others along the way. In France, they were given stylish English fashions. they would have been immediately arrested in clerical garb. However, it only took 7 months for the English to arrest Fr. Sherwin as he preached in a home. He was imprisoned in the Marshalsea where he converted a number of the prisoners. A month later, he was moved to the Tower of London. Here, for a year, he was alternately racked, starved and isolated in an attempt to convert him to the Church of England. When all failed, he was tried on charges of treasonable conspiracy and sentenced to hang.with his friend Alexander Briant.

Ralph Sherwin was beatified by pope Leo XIII and canonized, one of forty English martyred, by Pope Paul VI in 1970.

“I request thee once in thy greatest fervor to say over thy beads for me, and procure as many of my friends as you can to do the same there, and let your petition be this: that in humility and constancy with perseverance to the end, I may honor God in this vocation, whereunto though unworthy, I am called.”
a plea from St. Ralph Sherwin