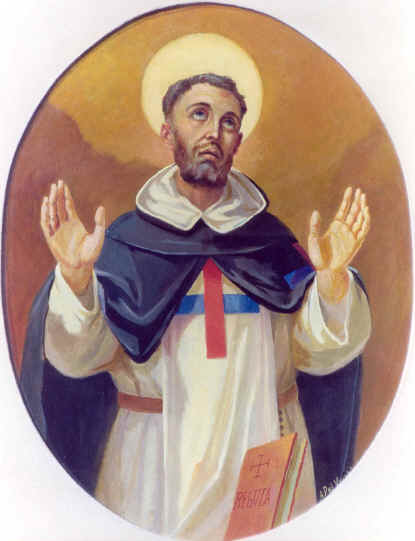 John was born of noble parentage in Provence in June, 1169. He was sent to Aix to learn grammar, fencing and horseback riding, the things expected of a nobleman in the Middle Ages. Being of a pious heart, John gave away money sent to him by his parents to the poor and worked at the hospital on Fridays. His desire to become a religious lead to his studying at the University of Paris and his ordination at the age of 23
.
It is said that at his first Mass, he had a vision of Jesus holding up two men in manacles, one a Christian holding a banner with a red and blue cross, and one a Moor. And he decided to help free Christian prisoners for his life goal. This was not a surprising goal, since it was during the height of the Crusades. The Moors had taken northern Africa, parts of Spain and southeastern France. The raids all along the northern Mediterranean coast put locals in danger. They were often held for ransom or placed into slavery
.
Intending to dedicate himself, John found a very pious hermit with whom to study the art of perfection, St. Felix of Valois. Another vision of the blue and red cross, this time held by a white stag, made John feel that the Lord was telling him something important. He and Felix decided this was the banner under which he should operate. In 1197

The two went to Rome and requested a formal order be developed for the rescue of Christians, under the patronage of the Holy Trinity. John, himself went to Tunisia at least twice to rescue many slaves in both 1202 and 1210, rescuing 230. Other members of the order went as early as 1201, rescuing 186. Several went to Spain to buy slaves there.

John establisshed a monastery just north of Paris and another near Rome to help with his work. The main means of rescue of the order was to go to slave markets and buy the slaves, then bring them home. This required a great deal of money and for that the Trinitarians depended upon the Blessed Virgin, under the title of Our Lady of Good Remedy, whose feast day is October 8.

He met St. Francis of Assisi in 1213 and introduced him to people who were helping provide for his work. He died December 17 of that year and that has become his feast day in later years.

“his then is the salvation of Christianity, that believing in the Trinity, that is, in the Father, and in the Son, and in the Holy Spirit, and baptized in this, we believe without doubt that there is only one true divinity and power, majesty and substance of the same.”
Council of Rome, 382