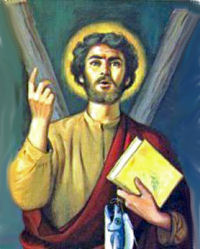 NOVEMBER 30 is the feast day of ST. ANDREW, APOSTLE (1st CENTURY).
Andrew and his brother, Peter, were born in Bethsaida, a predominantly Greek-speaking part of Israel. Their parents, Johna and his wife, observing Jews, spoke Aramaic and Hebrew at home and at synagogue. But, being business owners, they had to speak Greek for commerce. The young men were brought up in the family business, fishing and selling the fish. Most fish were dried and sent to the coast or to the area around Jerusalem, being the most populous areas, for sale. They moved the business to Capurnaum to be closer to the fish drying factories. The small company worked hand in hand with the Zebedee family business, which was larger, with hired help. These people were not poor illiterate fishermen. They were men of substance, who knew how to run companies.
Andrew and Peter, as well as James and John bar Zebedee, eventually split their time between running their businesses and following Jesus on His travels. Being men of intelligence, they grasped the Good News and had the ability to preach it.
According to the oldest Christian writers, Thomas was said to have preached at Thrace, Scythia, Byzantium, Kiev, Novogord and along the Black Sea. He founded the See of Byzantium in 38 AD, according to tradition. He was crucified at Petras.
St. Thomas is patron of the Ukraine, Romania, Scotland and Russia. His relics have been sent for safe-keeping all over the world. A number of them have been restored to the Eastern Orthodox church in Petras over the past 50 years.
“And Andrew, the brother of Simon Peter, was one of the two who had heard of John, and followed him. He first findeth his brother, Simon, and saith to him: We have found the Messias; which is, being interpreted, the Christ.”
John i. 40, 41