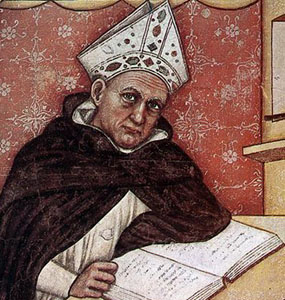 NOVEMBER 15 is the traditional memorial of ST. ALBERT THE GREAT (+1280).
Albert was born before 1200, probably, 1193, likely in Lauingen, Bavaria. His father was a military officer under the Emperor Frederick II. Sent to the University of Padua for his studies, Albert met Blessed Jordan of Saxony, who was looking for exceptional young men to join the Dominicans.
Albert became a professor of philosophy at several German colleges before moving to the University of Paris in 1241 as a lecturer of theology. Here he met his student, Thomas Aquinas. Seven years later, Albert moved on to Cologne to set up a school there. Thomas followed him. In Cologne, Albert set up a physics and chemistry lab and studied plants and insects as well. He also advised on the development of the new cathedral.
In 1260, Albert became bishop of Regensburg but left that post to become an advisor to the pope, traveling all over Europe for most of the rest of his life, even traveling to Paris to defend Aquinas’ orthodoxy.
Even in his own lifetime, Albert was called Magnus, the Great. His works included discussing Aristotle’s philosophy and the theology of the Muslims. It is said that he knew more about nature than anyone of his daay except Roger Bacon. He was declared a doctor of the Church in 1931 and was declared a patron of scientists because all his writings are scientifically accurate.
“The Eucharist produces impulses of angelic love and has the singular capacity of affecting in souls a holy, instinctive tenderness for the Queen of angels.”
St. Albert