POPE GREGORY IV AND THE END OF CHARLEMAGNE’S EMPIRE 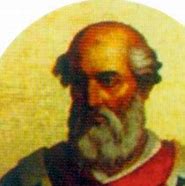 Although Pope Gregory did more than this, he will always be associated with the sad end of the Carolingian empire.

Born around 790, Gregorius was the son of John, an aristocrat in Rome. The young man grew up in the Church and was nominated cardinal-priest before he was ordained by Pope Pascal (817-824). When Pope Valentine died on October 10, 827, Gregorius had been cardinal-priest at the Basilica of St. Mark, in Rome, for years.

His election is believed to be a continuation of the attempts to control the local political situation that had been going on since Pope Eugene II’s succession. The nobles of the city were the ones to nominate Gregorius. He was perfect for the job. He was known for his learning, his energy, his mild manner and his distinguished looks.  It took some time to find him, however. Gregorius did not wish to concede to the nomination and was found in hiding at the Basilica of Cosmos and Damian. Despite that, he was installed at the Lateran palace.

The consecration of the new pope was delayed until March 29 of the following year. Supporters of Emperor Louis demanded they follow the Constitutio Roma, saying that the pope not be consecrated until the emperor give permission. They waited.

The most prominent part of Pope Gregory’s tenure was a series of attempts to intervene in the quarrels between Emperor Louis the Pious and his four sons and the breakup of the empire. It all started in 817 when the young emperor wrote up a deed, confirmed by Pope Pascal, dividing his empire into three in favor of the three sons of his first wife, Lothair, Pepin and Louis. As the sons aged, the bitter fighting amongst them grew. And with it, the dependence on the empire by the papacy decreased. When Louis decided to cancel the deed and rewrite one to include the son of his second wife, Judith, no one was happy. Gregory wrote a letter to the Frankish bishops, against the new deed.

A year later, the sons rebelled, had their stepmother kidnapped and sent to a convent. Gregory let her out. The father and sons reconciled.

That lasted three years. At Easter 833, rebellion returned to the family and the countryside. Lothair, also king of northern Italy, convinced Pope Gregory to join him and intervene with his father for peace. The Frankish bishops were supporting Louis. They said joining with Lothair meant supporting the king. Threats flew back and forth. Gregory wrote to the bishops, again, basing his actions on the primacy of St. Peter’s successor. The bishops insisted that a pope had no business interfering in the internal affairs of a kingdom or expecting them to follow his lead in politics. Their position meant that the equality of bishops outranked the leadership of the pope.

Despite the argument, Gregory crossed the Alps with Lothair’s army. Lothair sent Gregory to a reluctant Louis to try to negotiate peace. However, it was a ruse and Lothair did not let Gregory go through with the negotiations. Louis’ supporters deserted him and he had to surrender to his son and co-emperor.

If only it had ended there! The next year, there was another quarrel and Louis regained his empire.

Suspected of having aided Lothair, Gregory was questioned by the imperial envoys, who eventually walked away, assured of Gregory’s honorable actions.

Gregory, at this point, decided to quit dabbling in politics and intrigue and look at his own problems. The Saracens had begun another campaign to invade Europe and they took over Sicily, in Italy’s back yard. The aquaduct, Aqua Traiana, needed major repairs. His old basilica, St. Mark’s, needed to be completely rebuilt. Saints from the catacombs needed decent churches to be buried in. To defend southern Italy, Gregory rebuilt and fortified parts of the port of Ostia, 15 miles from Rome.

However, the empire was threatened again, in 840, and Louis started marching towards battle. He died on the way. The war changed. It was now between the brothers. Gregory tried to mediate with the envoys, but Lothair refused to cooperate. The final defeat of this son came at Auxerre, 841. The Treaty of Verdun, 843, marked the end of Charlemagne’s great empire.

Gregory promoted celebration of All Saints and the end of the iconoclast controversy. He conferred the pallium on St. Ansgar, the Apostle of Scandinavia.