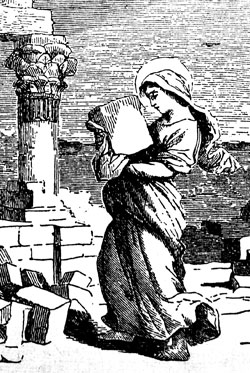 Husband and wife, Antigonus and Euphrasia, noble and of royal blood, were a young couple. He was in the employment of Emperor Theodosius the Younger. After the birth of their daughter, Euphrasia, the couple chose to live a chaste life and engage in acts of alms-giving and penance, looking forward to the time that they would be together in Heaven. After about a year, Antigonus died. Euphrasia, the mother, did not want to be courted, as would be the custom, so she moved with her five year old daughter to a large estate she owned in Egypt.

Near that estate was a holy monastery containing one hundred thirty ascetic nuns. These women fasted on little more than herbs and grains, wore sackcloth they had woven themselves and prayed many hours a day. Being so near to these devout women, Euphrasia the elder became dedicated to life honoring the Lord serving charitable concerns, although she continued to live on her estates. She tried to donate money to the monastery but the abbess would not take money, saying they had no need of it. So the young widow could only pay for incense and oil for lamps.

When the child Euphrasia was only seven, she told her mother that she wished to live in the monastery. The mother was beside herself with joy and soon brought the child to the abbess. Having kissed a picture of the Christ, the child made a vow of consecration. Before leaving her only child in the hands of the abbess, the good mother gave her child these instructions:
” Fear God, honor your sisters and serve them with humility. Never think of what you have been, nor say to yourself that you are    of  royal extraction. Be humble and poor on earth, that you may be rich in heaven.” She left weeping and within a short time, became ill and died.

On hearing of the death of the elder Euphrasia, the Emperor Theodosius, now technically her guardian, wrote to her asking her to return to the capitol and marry a young senator, Euphrasia now being twelve and thus of marriageable age. She wrote to him and told him that she had dedicated herself to the Lord, with instructions on how to dispose of the many lands, monies and slaves that she had inherited. The emperor did so, with regret, and allowed her to follow her heart.

Euphrasia lived out her life in that monastery, fasting and doing all the menial tasks, humbly accepting the remonstrances of others, Her handling of the simplest temptations was to go to the abbess and ask for the largest penances. At least one time, the penance was to carry heavy stones from one area to another. Miracles seemed to surround her before and after her death in 410.

We should follow the advice of the older Euphrasia to the younger:
“May God Who laid the foundations of the mountains, keep you always steadfast in His holy fear.”