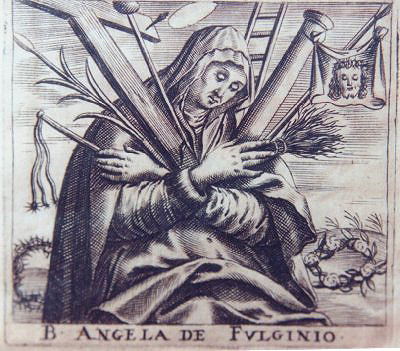 FEBRUARY 28 is the traditional memorial of SAINT ANGELA OF FOLIGNO (+1309). It is celebrated by the Franciscan Tertiaries and Regulars on january 4, but in the United States on January 7. Although she died in 1309, she was not beatified until 1701, despite years of veneration. Pope Francis declared her a saint on October 9, 2013, by equivocal canonization due to her cultus.

Angela began life as the daughter of a well to do family in Foligno, Italy. She married a rich man and had several sons.She lived in the time of much upheaval in Italy, The war with Perugia, the wars for land by the emperor and the pope, the founding of orders by both Francis of Assisi and Dominic. All these things were occurring almost simultaneously. Like many of the well to do women of her day, she was careless and worldly, seeking pleasure and self-indulgence.

Then, in her late thirties, she had a vision of the True Light, converting her whole personal view of the world and life in minutes. She developed a desire for penance and suffering, renouncing everything to find what she loved. Over the next few years, first her mother, with whom she was close, died, then, her husband, then her sons, leaving her alone to follow the Lord. She gave away everything, including the house she loved,saying that she was instructed to do it in a vision.

Trying to imitate St. Francis, directed by visions during ecstatic moments, she gathered around her a group of tertiaries, both men and women. She taught them poverty. She also wrote the Book of Visions in which she described in detail the steps she took for achieving salvation as well as her visions of Christ’s Passion. This book is still available in print. Her writings are so insightful, she has been called “The Mistress of Theologians” and is seen in much the same way as Catherine of Siena.

Let us follow her way and pray, “Lord, tell me what thou dost want of me; I am all Thine.”