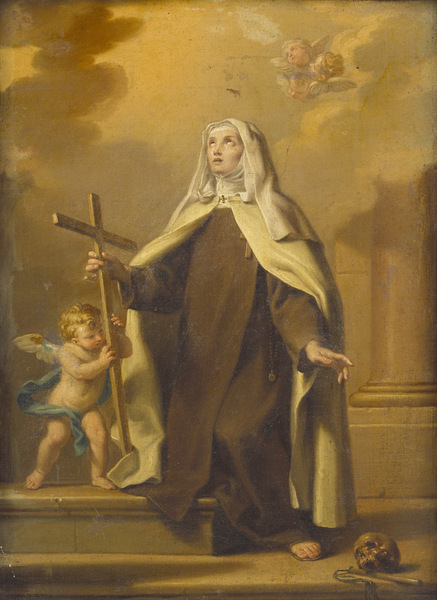 Margaret was born in Loviana, Tuscany in 1247. It was a time of renewal and revolt. The Dominicans and the Franciscans were new. There were always soldiers about due to the various local wars and international wars crisscrossing the Italian peninsula. Dante and Thomas Aquinas were both alive at this time.

But the lovely Margaret was born to poor farmers who, despite their poverty, spoiled their only child and gave her what they could. Margaret’s mother died when the child was only 7 and the father remarried to a woman who did not care for the child.  Margaret learned to find pleasure among the troops and citizens of the community. But that had to eventually affect the family. As a teenager, Margaret eloped with a young nobleman from Montepulciano, Arsenio. He had her move in as a servant, but they became intimate. She had a son during her time there.

When Arsenio was murdered nine years after she moved in, Margaret took her son and went back to Loviana. Her father would not accept her. Her desire for repentance was too much for her father. She then went ot the Friars Minor in Cortona when they took her and the child in.

Trying to overcome temptations of the flesh, Margaret tried living with a rope around her neck at one point and mutilating her face at another.  The Friar Guinta saved her from self destruction. At first, Margaret earned a living caring for sick ladies. Then she gave that up to serve the sick poor without pay, simply accepting alms.

After three years, in 1277, Margaret was admitted to the Third Order of St. Francis. Later on, her son would become a Franciscan friar. Pious and prayerful, Margaret was devoted to the Eucharist and the Passion. She was said to be in direct contact with Jesus, exemplified by her trances in which she said she heard a voice. Friar Guinta recorded some of the messages Margaret received, for herself and for others.In 1286, Margaret, founding a hospital in Cortona, was granted a charter allowing her to work for the sick poor. This charter allowed others to join to personally help or to give financial aid. They were formed into tertiaries and a special status congregation of the Poor Ones.

Margaret was told the day and hour of her death, February 22, 1297. She is now the patron of the falsely accused, hoboes, the homeless, orphans. midwives, penitents, single mothers and reformed prostitutes.

Saint Margaret, pray for us.

“Show now that thou art converted: call others to repentance…The graces I have bestowed on thee are not meant for thee alone.”
Attributed to Our Lord speaking to St. Margaret