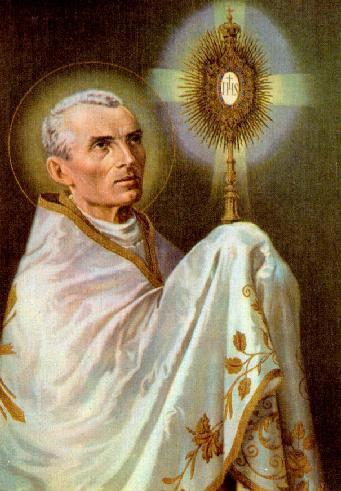 Named Apostle of the Eucharist by Pope John Paul II, Peter Julian Eymard was born to poverty in France in1811. His mother was a devout woman and took him to adoration often enough that he would go to church on his own by the time he was four. When his mother died, he decided that he wanted to become a priest. But his father prevented him for a time. Eventually Peter Julian entered the diocesan seminary, leaving only when he was too sick to continue. Apparently asthma and migraine headaches plagued him often.
Determined to continue, our saint eventually became a diocesan priest, but found that it did not satisfy his goals. He then joined the Society of Mary (Marist). However, his need for Eucharistic adoration and his belief that others needed it led him to try to form a society exclusively dedicated to that concept. The Marists found it out of keeping with their established goals and refused to support his idea.
After some time, Fr Eymard stormed Heaven with pleas to start a new society. Over time, the bishops and the pope accepted this association. Fr. Eymard spent the rest of his years spreading the love and knowledge of the Eucharist to all.
He wrote: “The spread of the Eucharistic Kingdom of Christ is necessary for the salvation of society. The Eucharist is the life not only of the individual Chirstian, but of nations as well.”
One idea haunted me, and it was this: that Jesus in the Blessed Sacrament had no religious institute to glorify His mystery of love, whose only object was entire consecration to Its service.