NOVEMBER 27 is the traditional memorial of ST. JAMES INTERCISUS (+c. 421).
The story of St James is a very interesting one in the light of the Middle East problems of today.
James was a soldier and a favored courtier in the service of King Yazdegerd of Persia. He and his family were Christian. Yazdegerd was well known as a tolerant, peaceful man. And he remained so until one of the bishops was accused of attacking the Zoroastrians. The king told him to repair the burned temple and he did not. The prime minister, who was recently appointed, took the opportunity to change the policies towards the Christians and begin persecutions which had not been seen in almost half a century. James, somewhat of a coward, renounced his faith, to avoid the persecutions.
His mother and wife were very upset on hearing this and prayed for his re-conversion. When Yazdegerd died and his son, Bahram, succeeded him, the two women wrote to James begging him to reconsider and claim his faith again. After much consideration, James returned to the Church and proclaimed it to Bahram. The new king reminded James of how many favors he had received in the past, implying that James owed all his faith to the present king.
When James resisted, Bahram said he would slowly kill him. And he proceeded to have his soldiers cut him into 28 pieces and then beheaded him. Christians were able to collect his remains and bury them.
St James is known as the saint who returned.
“The vine dies in winter, yet revives in spring. Shall not the body when cut down spout up again?”
St. James Intercisus, explaining why he was not afraid of his death 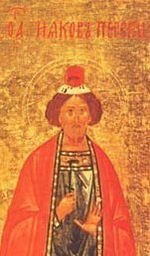